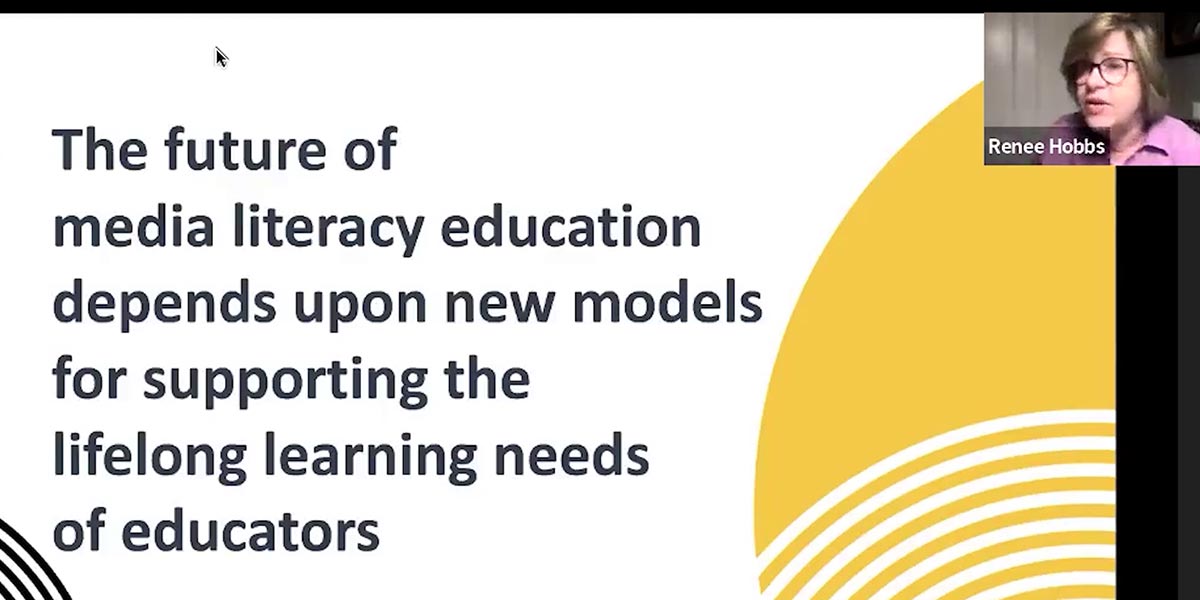 The complexity of media literacy and the various approaches in its implementation within the education were the main topics of the two-day international symposium organized by the Institute for Communication Studies (ICS) and IREX “Keeping up the pace: media literacy education in an acceleration age”, which took place on 3 and 4 February 2022 as part of the USAID’s Media Literacy Project YouThink.

The online event was attended by world-renowned media literacy persons of authority, such as American professors – Renee Hobbs and Paul Mihailidis, but also well-known individuals from Europe and the Western Balkans who empirically confirmed that the systematic approach to the development of media, digital and information literacy is shaping a new reality – one towards greater inclusiveness, democracy but also greater accountability. The discussion, which was followed by more than 500 participants from 14 countries around the world, concluded that educating only young people is no longer enough, but this is becoming an increasing challenge for teachers, professors, librarians and the older generation in general who is a hostage of the digital gap. Media literacy is not an independent skill, but is acquired through continuous training that leads towards acquisition of critical thinking skills, with engaging and rational response to the social issues – altogether in response to the lucrative “disinformation industry” and the growing trend of conspiracy theories.

The renowned professor Renee Hobbs at Harrington School of Communication and Media at University of Rhode Island, USA and Founder of the Media Education Laboratory, known by the concept of “Five Media Literacy Questions” said: “It is essential that we support the development of competent and confident media literacy teachers in all levels of education, especially in higher education.”

According to Paul Mihailidis, a professor of civic media and journalism at the School of Communications, Emerson College, USA, “media literacy is the key to building a society that will hold public institutions accountable.”

Professor Mihailidis presented at the symposium the research conducted by his school regarding media literacy impact in the context of civic and political engagement.

The participants had the opportunity to hear the experience of Finland, which topped the list of countries with highest quality of education for years, including highest level of media literacy in Europe. Media literacy in Finland is taught from pre-school age and is integrated into all levels of education.

Media literacy in the higher education in Macedonia

The thematic panel “In search of new solutions: education for media literacy in Nort Macedonia” showcased the results of the research carried out by the Institute for Communication Studies on the presence of the “media literacy in the study programs at the universities in North Macedonia”. Sead Dzigal, one of the authors of the research, emphasized that media literacy is taught in higher education institutions, although it is most often covered in curricula where media and media content are critically analyzed. The research showed that media literacy did not exit  as a separate compulsory subject until 2021, however several faculties are in advanced phase of accreditation of this subject (mostly at the pedagogical faculties). Still, one of the main conclusions is that the country “lags behind the implementation of media literacy in the educational process.”

In addition to the need for greater presence at all levels of the educational process, teaching media literacy also requires a special approach, since everything that was learned can be easily forgotten when a well-told story appears or fake and misleading information.

Professor Demush Bajrami from the South East European University emphasized the ERASMUS project he is engaged in in dealing with misinformation.

The faculties of pedagogy are facing the challenge of training future teachers in a timely manner in order to make them capable to cope with the influx of new media forms. Media Literacy related topics, as shown by the ICS research, are most often taught in the Media Culture subject, which actually follows the curricula in the mother tongue in the primary education. This subject is usually optional, and as the professors say, it is insufficient.

ICS also published a call for small grants (up to $ 8,500) that is open to all higher education institutions in North Macedonia that will submit proposals for inclusion of media literacy in the study programs. During 2022-2026 period, ICS and IREX will be awarding two grants annually to the faculties and universities. The deadline for applying for the first call is 1st of March 2022.

What is being done in the region, what are the young people doing?

The second day of the symposium was about “Insights from the Neighborhood: Media Literacy Perspectives in the Western Balkans” where the participants shared experiences from their countries. The conclusion is that, despite the many trainings and the introduction of media literacy as a different approach and at different levels in education, there is still a long way to go before the objective is achieved: to become better and more engaged citizens, for all groups and for all ages.

For Lejla Turchilo, a professor and head of the Journalism Department at the Faculty of Political Science at the University of Sarajevo, Bosnia and Herzegovina, media literacy is a form of social learning and practice, not an independent skill. She spoke about the need for continuous education of young people and adults in terms of media and information literacy in order to encourage critical thinking skills, improve the perception and instigate active participation in the social issues.

The situation with media literacy in Serbia was shared by Danka Ninkovic-Slavnic from the Faculty of Political Science at the University of Belgrade, who presented the results from the conducted research on media literacy. The research showed that journalism students have low level of knowledge in media literacy and the majority of them did not know how to identify the public broadcasting service as a pool for different views, attitudes and opinions.

In Albania, the media have excellent reputation. It is at the top of the countries in which trust in the media is at the highest level. According to the survey, over 80 percent of the respondents believe in media and 66 percent of the respondents said they specifically trust television. “The trust is higher in media and less in institutions, and given that the media in Albania are under political pressure and have ownership problems, the need for having greater media literacy is very clear”, said Emiliano Kaziaj, program manager for Learn to Discern. He also talked about the different types of misinformation that can be found in the media.

Croatia is satisfied with the level of media literacy among young people, because this field was included in the formal education some ten years ago. According to professor Viktorija Car from the Faculty of Political Studies at the University of Zagreb, students know how to recognize the source of news, how to protect themselves when using digital media and so on. But the problem is the digital divide: adults still do not know how the algorithm selects the news and they make decisions based on fake news because they cannot identify them.

At the “Youth mil champions: charting the path towards a better future” panel discussion, the young people from Macedonia demanded greater representation of the media literacy subject in all levels of education, but also greater involvement of teachers and professors in this type of teaching.

If the first segment of media literacy is access to information and media content, then students with disabilities a faced with serious infrastructural barriers.

The experience with the implementation of media literacy training in a dozen of schools throughout Albania showed tangible results. They not only changed the way of teaching but also encouraged the students to implement different way of learning.

The need for these or similar projects aimed at educating teachers in media literacy in Serbia was also pointed out by showing an illustrative example. In Serbia, there is a dominant presence of media literacy content for young people.

Youth Thinking is a five-year program funded by the United States Agency for International Development (USAID), implemented by IREX in cooperation with the local partners – Institute for Communication Studies (ICS), the Macedonian Institute for Media (MIM) and the Youth Educational Forum (YEF).

Video of the online symposia on 3rd of February 2022

Video of the online symposia on 4th of February 2022

Link to the agenda.