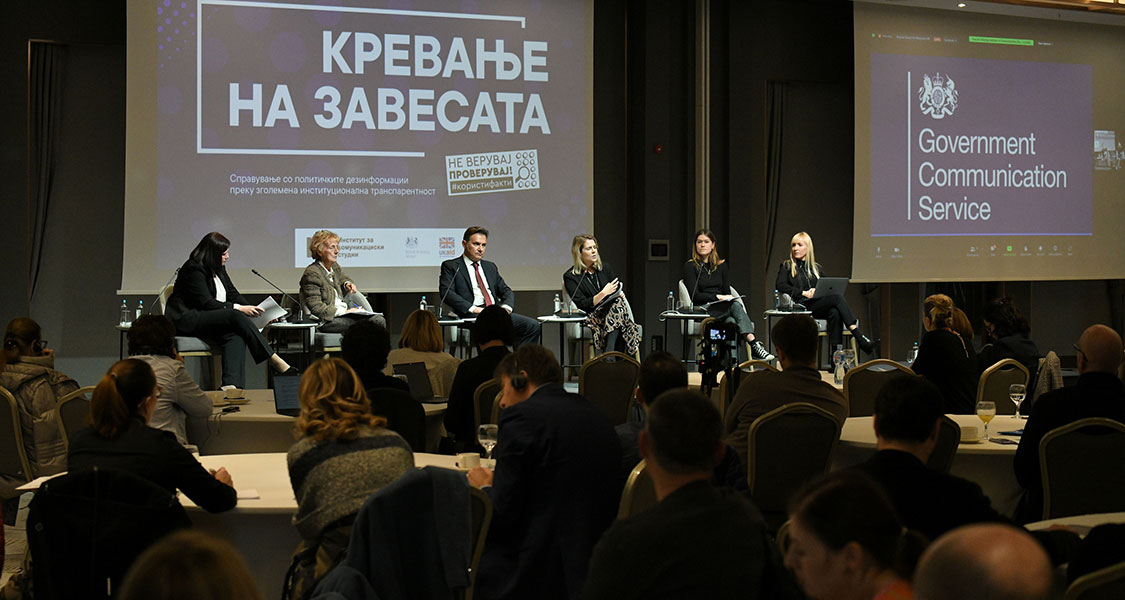 There is no single definition of disinformation in the Macedonian regulations. This leaves a risk that the policies to prevent the spread of disinformation might be actually focused on silencing the critical public and limiting the freedom of speech and the work of journalists.

These are some of the preliminary findings from the research carried out by the Institute of Communication Studies (ICS) that were presented at the international conference “Opening the shutters: Tackling political disinformation with increased institutional transparency”. Professor Vesna Shopar, who is part of the ICS research team, pointed out that the transparency of the institutions and the provision of timely and accurate information is extremely important as a preventive mechanism against the spread of disinformation. The initial findings indicate that in the last five years there has been an improvement in transparency according to the indices used by several civil society organizations, but some ministries have poor results in this regard. Journalists from 35 media outlets who participated in focus groups as part of the research, note that they are faced with formal transparency: it is often about “delaying the answer”, “shifting responsibility between institutions”, and transparency is often seen only as monitoring and promotion of the activities of the official. “The apparent transparency we are talking about is when the institution is providing a written answer that is just enough to say that they have not turned a deaf ear to the journalist’s questions, without giving a specific value to the journalistic story, but just for the sake of having the second or some other side,” said “Bloomberg Adria” journalist, Irena Karevska.

Zaneta Trajkoska, Director of ICS, said that this event is one of the numerous activities envisaged within this project aimed not only at revealing the sources of disinformation, but at their understanding as whole: the intent, distribution, the techniques that are used and its consequences. “We are neither unique, nor only in this challenge. Hence, we will work with all stakeholders: with the public institutions, with media, civil society, academia and different groups of citizens”, said Trajkoska.

The conference, which was opened by Slavica Grkovska, Deputy President of the Government of the Republic of North Macedonia and Andrew Brand, the Head of Programmes at the British Embassy, was also attended by Robert Popovski, National Coordinator for Responsible Governance and Transparency in the Government, who emphasized that, despite the reformed communications system and the active transparency approach, there is still a room for improvement.

The conference was attended by Gina Byrne and Caroline Ehrman from the International Projects Government Communication Service in the cabinet of the Prime Minister of the United Kingdom who shared how the British model of institutional setting and prevention of disinformation in the public sector works, in compliance with the guidelines of RESIST 2 toolkit. Ingrid Omahna from the Center for European Perspective from Slovenia said that for the fifth year in the region there are cooperation initiatives between the governments in the region via digital diplomacy projects, but also cooperation with the civil society sector, mass media and academia.

Iva Nenadic, a research fellow at the European University Institute and a member of the European Digital Media Observatory (EDMO) pointed out the risk of stimulating the media clientelism through state advertising, which is the case with 26 out of a total of 32 countries in Europe and the Western Balkans. Samantha Bradshaw, assistant professor at American University’s School of International Service, shared the key findings from the research which she conducted at the Oxford Internet Institute on how governments in 81 countries in the world, including Macedonia, use social media.

Disinformation is harmful – not only to individuals, but also to countries and societies. Camilo Umana-Dajud, economist at Organization for Economic Co-operation and Development (OECD), pointed out that a work is being done on drafting a methodology (which is still in its infancy) on identifying damage from disinformation campaigns at country level. However, in order to be able to do that, a single definition and parameters that would be measured at the level of countries are needed so that the obtained data can be compared.

The ICS shall publish the final survey in February 2023.

About the “Use Facts” project of ICS

This conference is part of a series of ICS activities within the two-and-a-half-year project called “ Use of facts-based journalism to raise awareness of and counteract disinformation in the North Macedonia media space”, which will provide support to citizens, journalists and civil society organizations in order to increase the public understanding of the origins, motives and impact of disinformation in society.

Using its online media platforms, the ICS shall investigate, identify and deconstruct the intentions, sources and narratives of disinformation that threaten to undermine the public trust in the institutions and increase divisions in the society. This approach will highlight the damage caused by the disinformation in North Macedonia.

The project is funded by the British Embassy in Skopje and will last until March 2025.

You can find the video of the conference HERE.